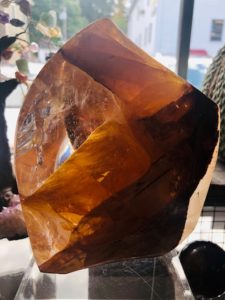 Appearance: A member of the Feldspar family, Sunstone is named for its warm shades of gold, orange, reds and browns. Traces of Goethite or Hematite refract light between the stone’s layers, creating an iridescent effect. Some are transparent, others opaque. The rarest type are found in red. Often, its sparkling core has the densest color, and displays a gradient appearance towards the edges.

Sometimes, an optical effect occurs when red copper is trapped inside. This gives the sunstone a geometric appearance similar to aventurine, thus giving it its secondary name, “aventurine-feldspar”. It is most commonly found in Southern Norway and Sweden.

Powers: As it’s name suggests, Sunstone is attributed with joy and self nurture. It restores the enjoyment of life, good nature and provides a sense of abundance. Through its power of abundance it has been known to encourage independence and originality. It is most known for being used as a ‘luck stone’, carried by those participating in competitions. 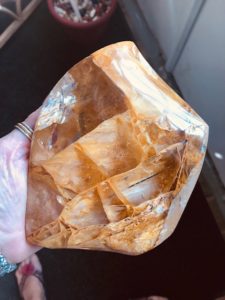 Health: The health benefits the Sunstone is associated with is its aid in reducing stomach tension and ulcers (when carried outside the body. It is not suggested to ingest your Sunstone). It has also been known to treat chronic sore throats, lifting depression and Seasonal Affective Disorder, and stimulated the metabolism.

Summary: Those who hold back because of fears and self-doubt may find Sunstone melts away the sense of unworthiness, feelings of being discriminated against, disadvantaged or abandoned. It emanates a rich and positive spectrum of energies that re-balances one’s emotional patterns, and encourages optimism and enthusiasm. It can help transform anger into energy and judgment into joy.