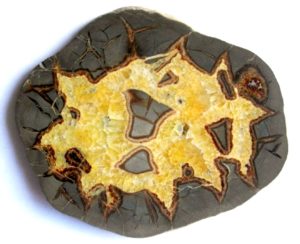 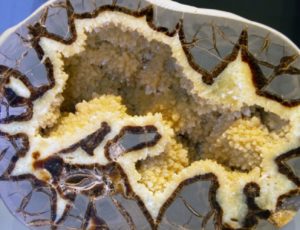 Human’s greatest fear is public speaking. According to surveys, this is something we fear more than death. Septarian relieves the social anxiety associated with public facing circumstances.

Also known as Dragon Stone, Septarian physically soothes muscle spasms and tension. The The improved sense of security and feeling grounded promotes self confidence as well as patience, tolerance, and emotional flexibility. These characteristics of Septarian stone is why it is often used to relieve anxiety associated with social and public situations.

This stone is unique as it is formed through the combination of dead sea life chemically bonding to the sediment of volcanic eruptions. It is a good that contains yellow calcite, brown aragonite, grey limestone and white / clear barite, thus it has properties of each of its component materials.

One of the most common ways to identify Septarian stone are by it’s angular cavities called “septaria”. The word is derived from the Latin word septum, or partition, and refers to the cracks clearly visible in the rock. Cracks are highly variable in shape and volume, as well as the degree of shrinkage they indicate. It is commonly assumed that cavities or cracks grew incrementally from the center.

Finally, did you know that a common misconception is that the concretions grow incrementally from the center, out. However it’s radial cracks taper towards the center septarian cracks, suggesting the surface material is harder than the center.